The locals know best, no matter where you go on holiday, and Clarens is no exception to this rule.

Clarens is known as the Jewel of the Free State, and the many facets of this jewel definitely deserve mention if you’re planning a weekend getaway.  If you’ve got more time, stretch your break in Clarens so that you immerse yourself in all that makes this village truly unique.

Although Clarens is still very much a village, it has become a sought after holiday destination for international and local visitors.  Many visitors who travel the short distance from Johannesburg, Durban and Bloemfontein make it a rule to get to Clarens as often as possible,to breathe in the fresh air and soak up the beauty of the valley.

The picturesque village, along with the stunning beauty born of the position it holds in the foothills of the Maluti Mountains, with the Red Mountains forming part of the valley, creates a magic hard to replicate anywhere else in South Africa.

Mother Nature, in all her glory, is on vibrant display through the seasons, making Clarens the perfect place to holiday throughout the year, which is all part of the magnetism that draws visitors year after year.

Despite this, Clarens is still a village completely at peace and in sync with its natural surroundings. This is no busy, noisy metropolis, but it has everything you need for an unforgettable weekend break.

If you’ve booked your accommodation at Clarens Eddies B&B and Self-catering, you’re in for a treat in terms of laying your hands on all the inside information you need to get the best out of your stay.

Let’s start with the hospitality you can look forward to during your stay at Clarens Eddies.

This is a team that’s won consecutive certificates of service excellence since 2014 from both an international and local booking website, which should give you a good idea of what’s in store for you in terms of service.

Living in paradise has made the team at Clarens Eddies as warm and hospitable as you would expect, from the first welcome as you arrive, to making sure you have everything you need to make your stay utterly comfortable.

You can expect service 24 hours a day from a team passionate about your comfort, made possible by the fact that Clarens Eddies is just big enough to sleep a total of sixteen guests, but small enough to make the service personalised.

Once you’ve unpacked and are ready for a look-see, Dawn Trevelyan and her staff will give you the low-down on everything you need to know about what to do in Clarens.

Dawn and her staff know where you’ll find the best food in town, and they’ll make sure they know what you’re looking for before they make their recommendations.  Bookings for breakfast, lunch and supper in any of the many restaurants in Clarens will be made for you, with pleasure.

If you’d like to know about hiking in Clarens, Dawn knows them all like the back of her hand!  Let her know whether you want to take an easy stroll or work up a bit of a sweat.Either way, she’ll send you off in the right direction for an unforgettable hike.

As for the over thirty activities to do in Clarens, well.  You’ll need some honest, down-to-earth inside information here to make sure you get out there and try your hand at the best of these activities to suit your ideas of fun.

Book your accommodation at Clarens Eddies today for the best of everything you could hope for on a weekend getaway, including great specials that make prolonging your stay even more affordable than usual.

As a village that was established in 1912, there is no shortage of history in and around Clarens.  Cultures have come and gone since the Khoisan left rock paintings as evidence of their time spent in the area, before the Europeans moved in during the 1800’s.

The Basotho people fought hard to save a place for themselves in the face of massacres and terror perpetrated by chief of the Matabele, Silkaats, who succeeded in dispersing most of the black tribes in the area through sheer brutality.

Having managed to cling to a place for themselves in the Eastern Free State, things turned bloody between the Basotho and local burghers (Afrikaans settlers).

All it took to start a war that lasted a year between the boers and Basotho. Today you can see the monument erected to honour five burghers murdered during this war, right in the Clarens Village Square.

The Second Boer War, fought by the Republic of Transvaal and the Orange Free State (known today as the Free State) against the British Empire was the last in a long history of bloodshed before peace returned to this beautiful region.

After all the bloodshed, Clarens and the area surrounding this Jewel of the Free State, finally found a peace that befitted the beauty of this valley.

If history doesn’t do it for you, perhaps you’d like to indulge your taste in art in one of the many art galleries in Clarens. There is such a mixture of art on display around the village that you’ll find exactly what you like among the various styles on display.

Because Clarens is a well-known artist’s haven, you can expect to see the work of artists who are already well established, and those who are just beginning to offer glimpses into the inspiration drawn from this beautiful area.

Since Clarens is only a two to three hour drive from Joburg, Bloemfontein and a bit longer from Durban, you should have plenty of room in the car for a few stunning pieces of art from Clarens!

So, if history or art doesn’t grab you, the food will!  Food is a central part of life around the Clarens Village Square, which makes sense when you consider that there’re over twenty eateries to choose from in this small village.

If all you can do is spend two or three days in Clarens, you’ll be able to have breakfast, lunch and tea in a different spot every day, with ease.

Then there’s the delightful craft beer brewed at Clarens Brewery.  The passion for what these guys do in brewing craft beer and the distilling of artisanal gin is infectious, which will easily have you hanging around far longer than planned.

If what you need is excitement and adventure to top it all, you could not pick a better holiday spot than Clarens!

The activities on offer are mind boggling in the extreme! Bring along your mountain bike to enjoy the beauty of trails that are easy enough for those not too into straining themselves, or go for the tougher ones if you really want to work it.

Flyfishing, white water rafting, hot air ballooning, horse riding, cycling, hiking, quad biking ….. and on and on! There is no end to what you can do with any spare time you have on your hands in Clarens.

If this has you chomping at the bit to pack up and get to this beautiful valley in the Eastern Free State, contact the warm, hospitable team at Clarens Eddies B&B/Self Catering and book your pillow for the duration.

By the way, a weekend in Clarens is magic, but, it’s guaranteed you’ll be back for a longer stay next time to make up for what you couldn’t explore first time round!

There’s a lot more to Clarens Eddies B&B and Self-Catering than its structure or building, which is great by the way.

It’s everything inside that counts, along with an awesome staff willing to go to great lengths to make your stay memorable.  The caring attitude you can expect is all part of what makes Clarens Eddies an award winning combination of hospitality, comfort and style.

The generosity of owner Dawn and her fantastic staff is felt in everything they do, from making sure that you’re utterly at home in your digs, to offering assistance in making bookings for restaurants and other activities.

With 24 hour service available, you can rest assured that there’ll always be a member of staff on hand to offer any assistance you need to make your stay as comfortable as possible, even after hours.

In terms of accommodation, you can look forward to retiring to your room or self-catering unit in absolute privacy, since each room or unit has its own private entrance.

The rooms are dressed in an entirely unique fashion, bringing style, comfort and art together in perfect harmony.  There’s not much by way of duplication in any of the rooms, and the artwork displayed in all rooms are all originals from local artists.

Here’s a visual sample of what real taste, individuality and comfort looks like at Clarens Eddies: 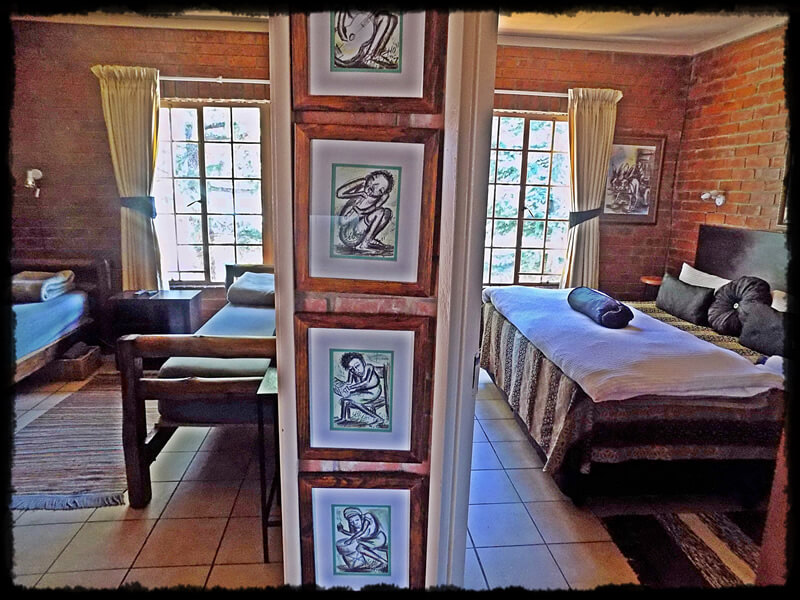 If you think you can handle this much comfort on holiday, then this couch is just the place for you! 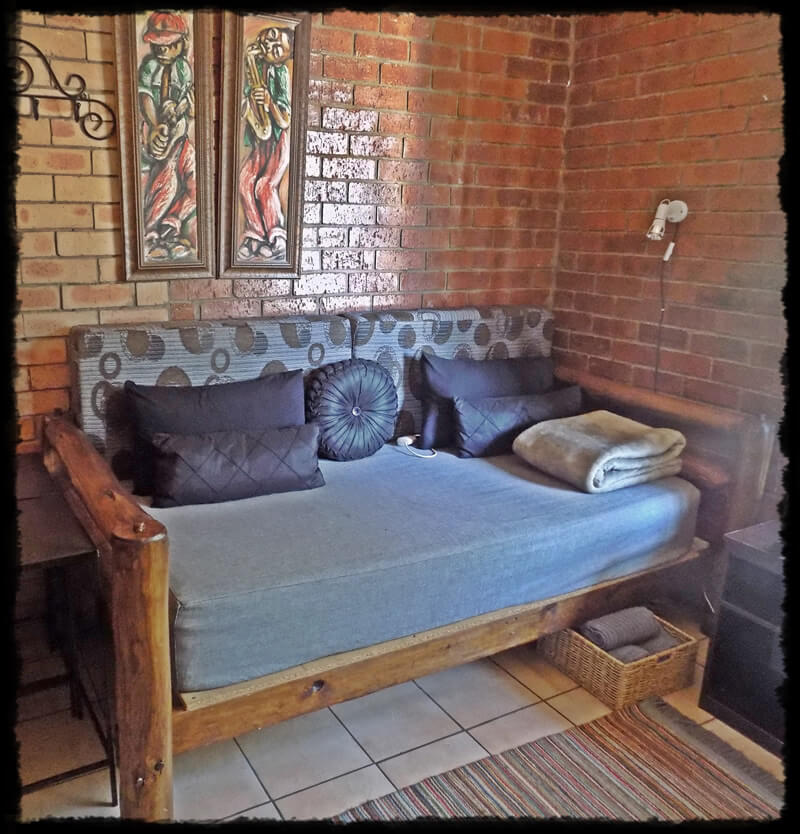 Clarens Eddies was designed to cater to guests planning to bring the family along on a self-catered holiday, or as a romantic getaway that sees guests eating out at the many restaurants in the Clarens Village Square.

If you’re going the self-catering route, everything is laid on, but just to set your mind at ease for when you’re packing, the team has made a convenient list of all you don’t need to pack on their website.

All you need to do is make sure the army you’re catering for is well provisioned in terms of goodies to eat (leave the complicated recipes at home!), clothing for hot days and for the cooler evenings, and, all the gadgets the kids and teenagers refuse to be torn from!

A great WiFi connection is an absolute necessity for these gadgets of course. Dawn has made sure that the uncapped WiFi with two WiFi boosters will keep the techies very happy.

For those who love to snuggle up after a day of adventure in Clarens, a flat screen TV with selected DSTV channels is on hand.

If you’re into a real break, minus the cooking, you’ll be happy to know that two of the rooms that sleep two will suit your romantic getaway perfectly!

You will have a toaster, microwave, kettle and fridge in your room for midday or midnight snacks, but most of the time you’ll be feasting out on the village square.

There is a self-catering unit that sleeps two, if you’ve decided that you want to give in to the passion you have for cooking up romantic dinners!

If you want to get up close and personal with the most comfortable, affordable accommodation in Clarens, then you owe it to yourself to contact this friendly team to make your booking, post haste!