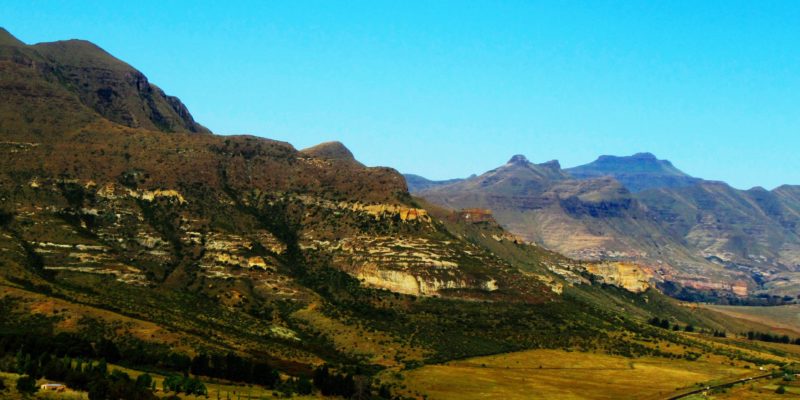 Think dinosaurs and you’ll get a picture of just how much history there is to uncover in the village of Clarens, Eastern Free State.

We’re going to take as brief a look as possible into the colourful history behind this village 100 years old, hugging the foothills of the majestic Maluti Mountains and close to the border with Lesotho.

Before there were any human beings in this valley, there were the Dinosaurs, and, their remains invite visitors to follow in their footsteps, to uncover fossils that have been preserved up to 300 million years.

Following in the footsteps of the dinosaurs in Clarens is something that both young and old will enjoy, especially when the tour is led by professionals who’ll give you the history behind the physical evidence.

Today the rock art of the Khoisan in the area around Clarens is evidence that these were the first human inhabitants in the area. Once the Basotho’s moved into the area, and the wars that came with them, the peaceful Khoisan (Bushmen) moved to areas more suited to their way of life.

There are caves in which bushmen/Khoisan art is preserved, a vivid journey into the history of these people who first lived in the Clarens area.

The Voortrekkers were the next to arrive in the Clarens area. This was in an attempt to get out from under British rule and the threat of war that always loomed between the boers and the British.  Peace was not to last for them though, not with the wars that started between the boers and the Basotho people, as well as those fought against the British.

In the period of 1865, war was declared on the Basotho nation on the heels of the murder of 5 Transvaal burghers in the Eastern Free State, a war that lasted a bloody year.

British colonization added to the war with the Basotho’s, bringing with it a war for independence that made the area around Clarens a battlefield. The British targeted boer families, destroying their homes and then sending them to British concentration camps.

Many women and children chose rather to hide in the same caves that had been home to the bushmen, giving Clarens and the surrounding area a wealth of historical sites, rich tapestries of stories that continue the legends of that period marked by bloodshed.

In the year that the Titanic sank, Clarens officially became a village, and in that same year, the prominent rock that welcomes you to Clarens and resembles the bow of a ship, inspired a local to name it Titanic Rock, a name that has lasted for 100 years.

Today, Clarens is one of the sought after holiday destinations in South Africa, enticing visitors around the globe to soak up the kaleidoscope that history, geology, architecture and art produces in this beautiful valley and village.

Whether it’s tranquillity you seek, surrounded by breath-taking beauty, or excitement in the form of over thirty things to do in Clarens, you’ll be satisfied on every level.

Make sure that you set aside enough time to take in all that’s on offer in Clarens because time passes so quickly, and before you know it, it’s time to pack up and leave.

There is a way to make sure that you catch up on everything that attracts you to Clarens and that’s to book your accommodation on the way out, and if there’s one team that’d welcome you among other regulars, it’s those at Clarens Eddies B&B or Self Catering!

Don’t miss out on the experience of a lifetime in this beautiful corner of the world by waiting too long to book this affordable, comfortable accommodation in Clarens!