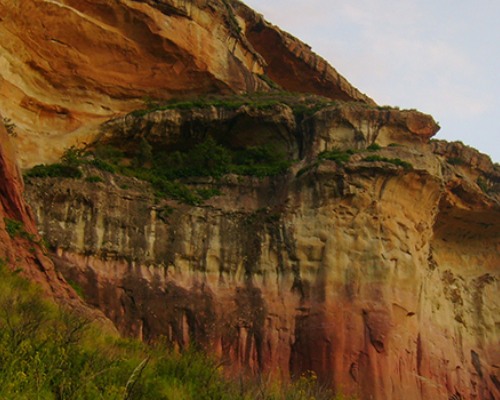 Clarens is the gem that nestles beautifully in a tapestry of history that speaks of dinosaurs that roamed the Eastern Free State 200 million years ago, along 50 million year-old Sandstone Mountains that reflect in their different levels and layers of colour the rich depth of their history.

This is but the backdrop to this exquisite valley tenderly nestled at the foothills of the Maluti Mountains. There is a lot more to the history that has made Clarens a unique experience for any holiday maker looking to make the most out of a trip to the Eastern Free State.

You’ll find that the sandstone from these mountains feature prominently in the architecture of this picturesque village, ever reminding visitors of its history that goes back over a 100 years.

The Dinosaurs and spectacular Sandstone Mountains are not all that make Clarens unique, but to find out everything about this village that makes it so demands at least one visit in a lifetime, no matter how far away you live!

Sunsets are made truly spectacular when thunder and lightning dance along the Maluti and Rooiberge (Red Mountains) mountain ranges in the distance, and, as with any ‘dorp’ far from the city lights, you can almost reach out and touch the stars in this magical valley.

Aside from the fact that thousands of 4×4 and cycling enthusiasts make yearly pilgrimage hear, Clarens is home to spectacular horse riding, and there’s plenty to be had, whether it’s for the kids, or for adults heading out for a pony trek in the Maluti Mountains.

Head for the Golden Gate Highlands National park for a guided horseback game viewing experience of wildlife and hundreds of species of birds. You can do the same at Schaapplaats Farm, where you’ll catch glimpses of Eland, mountain wildebeest, zebra and springbok from the saddle.

There is clear evidence of the lives Bushmen led in this beautiful area, left behind in their paintings, historical sites of bloody battles that raged between the British and the Boer settlers, and those that were waged between the Boer farmers and the Basotho.

Despite a history rife with bloodshed, Clarens is a rich tapestry of everything that speaks of peace and tranquillity, with art living in close quarters to food from virtually every corner of the world.

It’s almost impossible to leave Clarens without a keepsake found in a curio shop, craft market or art gallery, which makes it a good idea to bring a little extra in your wallet for more than just the smorgasbord of activities to be enjoyed in this corner of the Eastern Free State!

As far as accommodation in Clarens goes, the most central you can get is at Clarens Eddies! Despite the comfort and style you’ll be staying in, Clarens Eddies offers affordable accommodation that has been designed and built to suit diverse needs, from those wanting an affordable family holiday to couples looking for a romantic getaway.

Clarens Eddies B&B and Self-Catering accommodation has everything and more than you could possibly need on holiday in this magnificent valley, irrespective of whether you decide to feed the horde yourself on holiday, or to free yourself from the stove and indulge in all that’s on offer at the many local eateries on your doorstep.

Despite the fact that you’ll be surrounded by history, ancient and more recent, you’ll have free WiFi access (super-fast!) and for entertainment after a hard day out in the fresh air, a flat screen TV to lull you to sleep if the sound of crickets and birds saying goodnight are a little to loud for you!

Book your stay in Clarens today by calling the friendly team at Clarens Eddies for an unforgettable holiday!